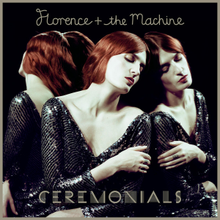 Ceremonials is the second studio album by English indie rock band Florence and the Machine, released on 28 October 2011 by Island Records. The band started working on the album in 2010 and finished it in 2011. All of the songs on the album were produced by Paul Epworth, who also worked prominently on the band’s debut album Lungs (2009).

The album received acclaim from music critics, who drew comparisons to artists such as Kate Bush, while also praising the instrumentation, Florence Welch’s vocals and the production of the songs. As a critical success, it appeared on several year-end critics’ lists in late 2011. Furthermore, Ceremonials received a nomination for Best Pop Vocal Album and “Shake It Out” received one for Best Pop Duo/Group Performance at the 2013 Grammy Awards. Ceremonials debuted at number one on the UK Albums Chart, becoming the band’s second consecutive number-one album in the UK. It also debuted at number one on the Australian Albums Chart and peaked at number six on the US Billboard 200 chart, becoming the band’s first top ten album in the United States. English novelist Emma Forrest contributed an essay to the album, which can be found in the booklet of the CD edition.